Briefly refer to: Docker vs VMWare: How Do They Stack Up?.

For me, I used to use Virtual Box (a virtual machine) a lot, but now start using Docker (the leading container).

To install Docker is ONLY one single command:

Clearly, there is one more interface docker0 added into pi01‘s IP info, but it’s now DOWN.

By the way, to uninstall Docker, 2 commands are required:

Beside have Docker uninstalled, you may have to manually remove the IP link to docker0.

Then, let’s enable and start docker service, and add user pi into group docker to be able to run docker as user root.

Well, I can pull alpine and keep it UP instead of arm64v8/alpine though.

However, due to a bunch of the other instabilities, I downgrade the system from Pi4 64-bit raspbian kernel to Raspberry Pi OS (32-bit) with desktop 2020-05-27. And it’s interesting that image from arm32v6/alpine is exactly the same as image directly from alpine, namely image ID 3ddac682c5b6.

By the way, please refer to my posts:

Let’s take pi02 as an example.

Now, we can see docker0 is UP. And a wired connection is running as the additional interface vethc6e4f97, which is actually just eth0 running in docker image arm32v6/alpine.

In order to avoid issues about registry, we can run docker login, so that a configuration file /home/pi/.docker/config.json will also be automatically generated.

From the above command docker info, you can see clearly that Swarm: inactive. Docker now has a Docker Swarm Mode. Now, let’s begin playing with Docker Swarm.

If you’ve got both Wired and Wifi enabled at the same time, without specifying with connection you are going to use for initializing your docker swarm, you’ll meet the following ERROR message.

By specifying the argument --advertise-addr, docker swarm can be successfully initialized as:

On each worker, just run the following command to join docker swarm created by master.

Come back to pi01, namely, docker swarm master, also the leader, and list all nodes:

In our test, we ONLY designate a single leader. You can of course have the option to designate multiple leaders by using command docker node promote.

Here, we test all Alex Ellis’ Swarmmode tests on ARM.

Create the service on leader with 4 replicas on both the master and 3 workers.

Then, we can list the created docker service on the leader.

This time, let’s take pi04 as our example:

In this example, we will create 2 replicas only for fun.

On master pi01 and worker pi02, there are 3 running docker images:

On master pi03 and worker pi04, there are only 2 running docker images:

Since service alexellis2/arm-alpinehello is only running on master pi01 and worker pi02, let’s just check respective docker logs in the following:

Afterwards, a redis database service is created and runs on a single node, here, master pi01.

Finally, 2 replicas of docker service counter are created in this created subnetwork armnet and listening to port 3333.

Now, let’s list all created docker service on the leader.

It’s interesting that this time:

I’ve got no idea how the created services are distributed to different nodes. The ONLY thing I can do is to run docker ps and show the distribution results: 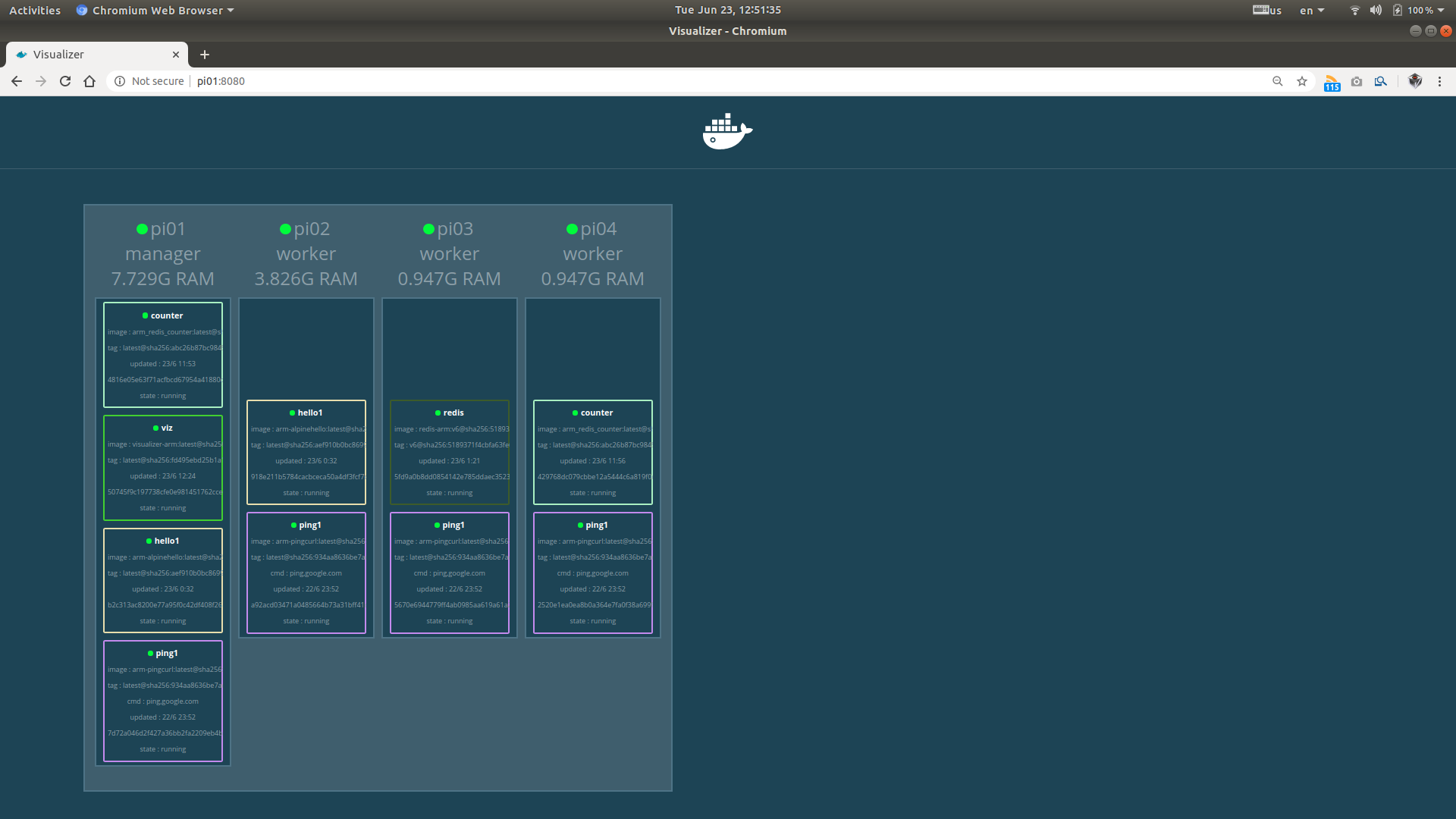